This post will include talk about Bellbell, but will not be in her voice. Sorry, fans!

So, this weekend, I tried healing on my Paladin for the first time. Her gear, though not the best, has been sufficient for normal 80 instances (all that she has been healing since she dinged; did I mention she's 80 now?). Obviously, I have two more years of experience on healing with a Druid than I do with a Paladin, as before this level, Bellbell only threw out emergency heals until her tiny mana pool ran out. So needless to say, this has been an entirely new experience.

The first thing I noticed was that I could no longer jump around while healing. I was intensely stationary. Any loss of mobility has never been a problem for a druid (barring Judgement of Justice), and to suddenly be glued to the ground caused me some irritation. Yet, it was not an overwhelming problem; I still had Holy Shock should I need a quick, small heal while I was in transit, or Lay on Hands in an emergency. Sacred Shield, though not really a heal, is also instant cast and can ease the burden of mobility issues.

The next difference was the cast timer. Rather than the bulk of my heals being instant, I had to deal with cast times. This, I will not lie, stressed me out. It didn't matter how short the cast was, I was completely tense while I waited for the cast to come off. Why? Well, with a Druid, while your cast-time spells are going off, generally there are HoTs ticking on your target. You're still healing while you're casting. On a Paladin, no such luck. And though I am attempting to pre-cast my heals, the lack of practice makes me only correct about a fourth of the time. 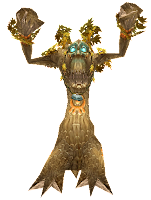 Finally...no AoE. This has been a major adjustment. Though Beacon of Light takes some of the pressure off of tank healing during those times when everyone is taking damage, the lack of an instant (or even cast-time) AoE heal just plain hurts. Due to my current gear situation, it obviously hurts a little more than others with better stats, but, still. Ouch.

Paladin healing is by no means bad, nor do I dislike it. It has simply been a major adjustment, especially as I raised Bellbell since level 10 to be Retribution (I was Ret before Ret was cool). She is slowly gaining gear, and being able to try out a different perspective in healing has been very informative. It may just be the two years of experience talking, but, I still love Druid healing most of all.
Posted by Bell at 8:58 AM

Your paladin healing experience exactly mirrors mine. I was aware of the lack of AoE healing (though I've never played a different healer). But being stressed about cast times is also exactly how I feel, even thought I wasn't quite aware that that was what was stressing me out.

I've also had the same experience. I'd occasionally feel stressed with burst damage on my druid but with my pally I feel stressed a lot of the time, especially with PUGs who don't know what they're doing. I've got pretty good gear on my pally now so things are easier but I'm still not sure how the stress / fun balance is coming out. I think that that stress is why there's a healer shortage. I feel stressed as dps when I'm carrying people (like VoA PUGs) but it's not even in the same ballpark.

Hey Bell! I can't check out your armory from work, but are you using the Glyph of Holy Light? While it's not perfect, it does help a lot with the shortage of AE heals.

Are you judging light? While it's not much, it is also very helpful in an AE intensive setting.

I too also find I stress more healing on my paladin than my druid, and I definately see why paladins really dislike healing certain fights =)

I'm in the opposite seat: I have 2+ years of experience with the Holy Paladin while my Druid is less than 8 months old.

When my tank is taking damage on my Paladin I know exactly how much damage I can heal and how long it will take to get the healing there.

Spike damage? Pfff. That's just a Holy Shock + FoL or HL away.
The freak out moments for the Paladin are limited to things like AoE DoTs. I can't HoT everyone and then get back to the tank, and my direct heals will just overheal. If I try and dispel everyone then I end up racing the GCD to get back to my tank in time.

When my tank is taking damage on my Druid I have to ESTIMATE how much damage he is GOING to take, HoT him up, hope the HoTs are good enough while I watch my mana like a hawk to avoid going OOM.

Spike damage? OMG WE'RE ALL GOING TO DIE! I tend to forget I have Swiftmend (because of the long cooldown). Spamming HT just puts me even MORE in the mana hell.
On the other hand, when I see a group DoT go out... it's just Wild Growth and go back to the tank.

I'm really looking forward to more practice with the Druid. I think the thing that really freaks me out is the number of tools available. Pick the wrong one and people might die. With the Paladin there are fewer tools... and thus fewer chances of getting it wrong. :)

I found the difference between druid and paladin healing even more profound upon entering 80 arena (did S3 and S4 as a druid and loved it). I really miss my druids mobility, and the cc options.

I can feel your pain, sorta. I levelled up Leyola through the dungeons rather than with quests. At one point, I wanted to quest with her, so I tried out a weird dps/healing hybrid dreamstate spec. The loss of ToL and Wild Growth were a little too much for me, having to resort to use Healing Touch as my primary heal.

The biggest "hits you on the head" moment when it comes to this type of transition is Keristrasza in Nexus. Trees can shift through the Ice chains, and can run freely around. When you're limited to HT, the option isn't there anymore, and it's really tough if you're not used to it.

Like other comments, I have the opposite view. I have 2 80 holy pallys and a 43 Drood who is resto/feral.

The healing is a totally different style, but the change is a great way to keep healing but not suffer healer burnout.

And now for my gratuitous self-promotion ;) http://nonsquishyheals.blogspot.com/ is the pally-with-a-drood-upcoming side of the blogging coin :D Newly minted ;)

Um no offense but some of your points are wrong, for instance holy shock is a major heal, not a small fast heal.

Heleon is probably splitting hairs. My main is an 80 holy pally starting Ulduar. I don't think that Holy Shock is really considered a "MAJOR" heal, especially when compared with Holy Light. Also, it's so mana inefficient, I don't use it unless I really need to move around.

I really enjoyed this post! I can't tell you how much Maly freaked me out when I first ran it... :) My alts are all dps, and I think this has inpsired me to roll a droooood! I want to see what it's like.

Hey all!
Ok.. I have been playing a healing druid for a few years. I love the mobility and for spike damage on fights I know I just time the lifebloom to save the day. lol.. With pretty good gear.. I rarely run out of power and of course .. there in innervate. Use lifebloom alot.. with my mp5 it gives a positive gain in power when it blooms. Soo.. for about 5 months I have been healing with a pally. I went through the nightmare adjustment period and here I sit. In ulduar wishing I had my druid. LOL... For some reason I feel like I am spitting on a bonfire. I can usually keep the tank up. Still.. my hps is just sad compared to my druid. On the tank.. my biggest heal only takes him to half health from near death... and other than that... there is a definate line where the damage gets over the top and I just cannot recover.
The druid limit is a bit fuzzier because depending on the cooldowns I can do burst healing well over 6k hps. I sure hope they give pally healers a little more punch.