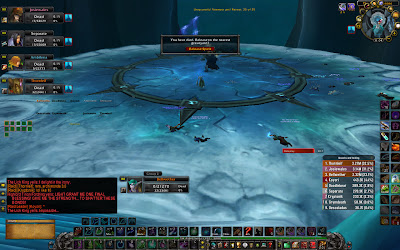 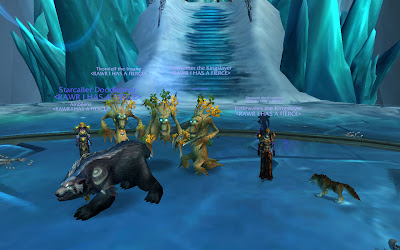 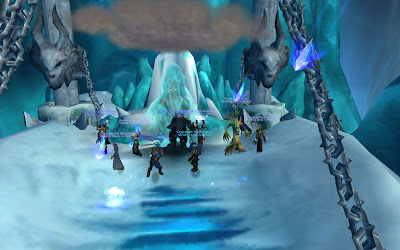 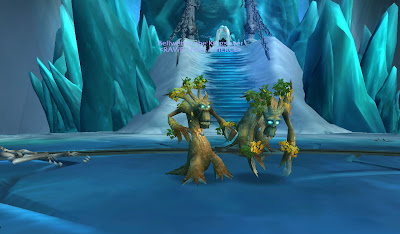 First title I've worn, ever, that was not "Corporal." Also, for those of you who don't know, that floating tree body is me. I didn't get enough heals through the Lich King's Harvest Soul ability, and when I died my soul floated outside my body. After Tirion raised us up, it was still there.

I wonder if this is how a Death Knight feels?

Hey everyone, it's Bell here. This is a post written by one of my friends, who thinks he knows a thing or two about healers. Or, well, how you should heal him, I guess. So, enjoy! Remember, I'm always open for guest posters who want to flex their writing muscles. 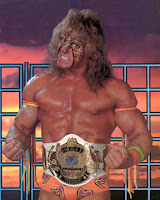 Hi. I am a Fury Warrior, and I stand in things.

When you see me standing in that nasty cloud, it’s not because I’m not too bright (well, not completely). It’s not because I didn’t see it. I might say I turned my effects down, but I didn’t. I saw it. I ran to it. Oh yes, I ran right there. I’m there because I hate that guy we’re fighting, and I want him dead. I want to kill him dead faster, harder, and with more love, baby! And I’m gonna stand in that fire over there to do it.

Think of it as a spotlight. I’m in center stage and I am ready to rock.

So next time you see that Fury Warrior’s green bar drop, do him a favor. Don’t ignore him. Don’t scoff at him. Don’t turn your head and pretend like he “dropped too fast.” Throw him a heal. Give him that little bit of your mana bar, the part that says, “I love you and your ridiculous oversized weapons.”

DISCLAIMER: This article was written in satire. I don’t really stand in stuff. That’s just silly. But all the same, don’t forget to heal us, because sometimes we do die in fires, and that makes us sad.
Posted by Bell at 12:12 PM 10 comments:

Who likes to listen to music while raiding? I do! Of course I have to keep my WMP set at a volume no higher than "7" so I can hear what people are saying in Vent, but I do still like to have that background noise.

My favorite, though, is when you find those songs that so perfectly match a boss you can't help but laugh and enjoy the kill that much more. Unfortunately, I haven't found the songs for all of the bosses. Just Marrowgar, Lady Deathwhisper, Gunship Battle, Rotface, Blood Queen, Dreamwalker and the Lich King. The other bosses? Well, that's where you come in.

What song do you think has the perfect lyrics, is just funny as all get out, or has epic timing for these bosses? Heck, if you have better ones than I picked for some bosses already, feel free to let me know about those, too! Every suggestion I get, I'll find a link to post under the boss, so we can make the ultimate Icecrown playlist.

(Songs may or may not be NSFW; use your best judgment)


(Suggested by Fricassee in the comments!)


(Suggested by Rades in the comments!)


(Suggested by Forreststump in the comments!)

(Suggested by Forreststump in the comments!)

(Suggested by Forreststump in the comments!)


"Sustain You" - Greenwheel
Video Unavailable
(Suggested by StoppableForce via IM!)

(Suggested by Iliana via IM!)

The following occurred as I was talking with a friend about raiding and how there's a difficult balance between doing necessary content and content people want to do. It's a balance of needs, wants and social structure that's much different than just playing the game by yourself.

(1:44:10 AM) Bellwether: it's like being on a sports team. People depend on you. If you decide to just up and not come because, for one night, it doesn't benefit you, what incentive does the guild as a whole have to do things that do benefit you?

(1:44:27 AM) Bellwether: After all, you've just proven you're only in it for yourself, and the hell with the other people.

It's easier when you're just playing by yourself or with a few other people. It ends faster, and you have a lot more control over what you do, who you play with and how long you play. When you get into the more complicated area of guild play, however, there's much more to it than that.

In a twenty five man guild, twenty four (or more) other people depend on you to be there not just for yourself, but for the group as a whole. People want to be able to rely on you and trust you'll be there for them like they were for you. Show you're just there for that sweet trinket or weapon, and they'll be less inclined to give it to you. In fact, you're more liable to be replaced or phased out for someone new.

(1:45:48 AM) Paradox: I ran a few people I met in PUGs through low level instances for the hell of it on Duranon a few times.

(1:46:46 AM) Bellwether: Like I said; it's different when you're in a raiding guild. And we have incentives that make people want to be valuable to us. Our most valuable players are the ones who do things for the good of everyone, even if maybe on that particular raid night we are not doing the bosses they like.

Raiding guilds can get a lot of flak in this area for taking a game too seriously. If you aren't enjoying a game, you need to leave, stop playing, go do something else, right? Well, in a raiding guild, that's not always an option.

As mentioned previously, a guild wants to know you are valuable to them. The guild is already valuable to you; unless you can find another guild of similar or greater progression, you need the guild, as a working entity, to get to the content you want to see, to get the gear you want to wear, and to play the game where you've said you want to play.

Except on first boss kills (and sometimes not even then) you will probably never find a raid group of 25 people who are completely chill and totally happy about what's happening. The main goal is to maximize the enjoyment of the most raiders possible; when the amount not enjoying it exceeds the amount enjoying it, it is time to switch. If only one or two are upset...well, it is tough luck for them.

(1:48:04 AM) Paradox: I'd like to do raids when I get back in, but the idea of being obligated to play a game just boggles my mind a bit.

(1:48:45 AM) Paradox: When you get to the point that you're complaining about what you're doing in the game beyond an occasional bitch about this or that minor thing, it's time to reevaluate things I think.

(1:49:03 AM) Bellwether: You're not obligated. You do exactly how much you want to/feel the need to -- and the guild makes a decision on whether or not you're the kind of person they want around.

(1:50:09 AM) Bellwether: There's no forcing. There are incentives, such as "if you prove you're unreliable, we will replace you." or "we can't trust you to show up when we need you so there isn't a real incentive for us to want to give you gear over the person who is always here when we need them."

(1:50:38 AM) Bellwether: Raiding doesn't work without synergy and people moving together towards a goal.

(1:50:57 AM) Bellwether: Sometimes, to get to the things you really want, you have to kill the boss you hate.

(1:52:26 AM) Bellwether: (with good players; there are "real, organized" guilds who do not get as far as pugs because their player base is lacking)

(1:53:21 AM) Bellwether: Raiding guilds aren't for everyone, by any means. But if you want to try one, understanding the social difference is important.

WoW has admittedly gotten easier. But some things do not change, and that is the fact that to get as far as possible, as soon as possible, you need a dedicated, working group of good players who know how to play and who work together. And this means that, sometimes, you have to sacrifice what you want to do and get done what others need.

In a perfect world, everyone would love all the content, would love all the encounters, the trash, the grind. But that's never going to happen, so you have to seek the proper balance in your raiding. If it eventually turns out that the cons out weigh the pros, then raiding is not for you.
Posted by Bell at 10:25 AM 18 comments: 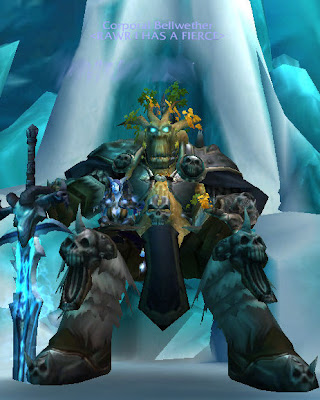 The slime is flowing again!

Yes, I'm back, for better or for worse. It's been a while and, let me tell you, it has been freaking crazy.

Let's see...I found a new guild, then after we killed Sindragosa our guild leader had a freak out, kicked everyone and absconded with the guild bank. We quickly reformed into RAWR I HAS A FIERCE (yes, I am serious, that is our name) and are back to our old progression.

Oh, and I'm an officer now. Recruitment, specifically. It's exhausting.

(LF Warlocks, Shadow Priests, another non-Druid healer or two, go to our forums for more info!)

Besides that I've had school, money problems, family issues, just lots of personal life exploding in my face and though it's mostly settled down to where I am not super stressed constantly, things are still pretty shaky.